Fair Game is a killer-thriller loaded with thrills and spills, murder and mayhem, several neat twists, lots of suspense and a particularly memorable plot.  If you enjoy murder/detective stories with suspense and surprises, you’ll really enjoy the twisted and brutal mind of the hidden killer in Fair Game.

Better still, take the challenge and see if you can work out who’s-doin’-it, and why.  Here's betting you can’t!  It’s tricky, impacting, and most of all, memorable.  Fair Game offers you the thrill of trying to work out the identity and motive of the hidden killer.  All the hints are there… so best of luck working it out!

Fair Game also offers a glimpse into the Christian message, as portrayed by various characters within the story.  This allows the reader to consider what the message of Jesus Christ is really all about, explained simply and without religious fanfare or ambiguity.  Not a religeous book, just one with a fantastic message.

This is not a story for the squeamish, but in reality, the world truly is a harsh and dangerous place - even for the innocent.  Hence, perhaps the message of Jesus Christ truly does belong amid such a turbulent and dire situation.  Food for thought.

In the small town of Greenrock, there lurks a brutal and sadistic killer.  The fiend stalks and murders young models, showing no mercy.  No one feels safe.

Detectives Tony Fisher and Dorothy Shank must hunt down the killer before the body-count rises any higher, but it is a task they know will not be easy.  The killer leaves no clues, except for the cruel and efficient manner in which victims are so brutally dispensed.  With no witnesses, no clues and no trace of the killer, they know more young victims will die...

The common bond and prime suspect for the killings is a young photographer named Matthew Dunsten.  Each of the young victims has modeled for Matt at some time in their search for fame and fortune...  Their gruesome deaths now afford them a new and different kind of fame - one they would like to have avoided...

What is the motive behind this series of callous killings?  What drives the killer to pick certain victims?  And what hope is there for the people of Greenrock?  Most of all, who will die next???

Take the challenge.  The clues are all there, hidden within this most gruesome and tense novel.  This is one of those ones where you can guess the killer if you just pay attention...!  If only the young victims had been paying attention...

Fair Game also offers a glimpse into the Christian message, as portrayed by various characters within the story.  This allows the reader to consider what the message of Jesus Christ is really all about, explained simply and without religious fanfare or ambiguity.  Not a religeous book, just one with an amazing message.

This is not a story for the squeamish, but in reality, the world truly is a harsh and dangerous place - even for the innocent.  Hence, perhaps the message of Jesus Christ truly does belong amid such a turbulent and dire situation.  Food for thought.  I think you're going to love it.

Tears rolled down ???'s face as she cried, whimpering, holding up her hands in an expression of surrender.  She bleated, her words barely discernible amid the gulping cries that choked her.

??? watched in cold, agonizing dread as the lever pulled tension on the string while automatically loading the next of a series of short arrows into position, ready to be fired.  The weapon was reloaded in no more than two seconds.  So efficient, she thought, half-crazed with delirious terror...

The hunter, having enjoyed the thrill of the hunt, their game, had no patience for any more trivialities.  ??? was unaware of what was happening, except for the presence of the cruel one, and a cruel, searing pain.  She gasped again; a noisier, more fervent sucking of air, nothing short of a long, grunted snort...

In ???'s mind the figure took on an evil, almost possessed look.

Clearly the person was staring at her, the hidden face never moving as the cruel eyes bored into her.  She turned her surfboard to face the person in an attempt to hide...  Of course it was too late for that...  She took a backward pace.  And another...

...the stranger closed the gap with ease.  When ??? glanced behind again, the fiend was only five meters back...   ??? stopped and faced the puffing individual, holding up her board once more between them.  To her immense relief, the stranger stopped too...

Her mind was almost in shock, reeling against terror and burning agony, and yet refusing to surrender to the torture.  A moment later she was driven to the brink of insanity, of total mental collapse as she saw a flash of silver and a khaki arm slip silently beneath her chin.   ??? had seen the news the previous night...  She knew what would come next...

And then, as though the storm of horror had passed, the stranger did not strike.  ???'s arms reached up and held to the drab forearm, her breaths heaving as the stranger leaned close.  The young woman feared desperately for her life, certain that she would be murdered any second... and yet the attack had clearly paused.  The hidden, camouflaged figure leaned close, and in the deafening silence that reigned since the demise of the pulsing stereo, ??? could hear the excited breaths of her attacker in her right ear.

Why should she fear?  After all, just because she had been listening to the mindless chatter of gossiping fools who sounded as though they were almost enjoying the presence of a serial killer in their small town, there was no sound basis for her fear...

With the flashlight still held high in readiness to strike, ??? took one last look about her to make sure she was not being ambushed.  There was no one, she told herself.  To be so afraid was ludicrous.  Unfounded.  So she pushed at the door...

Despite the thick, timber walls of the old building, combined with modern fire-retarding materials added during the refurbishing process, a passing pedestrian was still able to hear ???'s terrified, piercing scream.

“...It just might have escaped your attention that you fit the victim profile of this killer perfectly.  Haven't you noticed?  You're blonde, good looking and female.  Open your eyes, Ma'am.  If ??? does have anything to do with these killings, you just might have more to gain by thinking about it than anyone else around.  Get it?”

Cheryl swallowed audibly and took a step away from the detective, who had allowed her tone to become quite forceful, while still keeping her voice just above a whisper.  The lawyer's eyes opened even wider than before, her mouth gaping slightly in unison.  Cheryl did not reply, but stood stunned and silent for quite some time.

She had definitely 'got it'.

“...It just might have escaped your attention that you fit the victim profile of this killer perfectly.  Haven't you noticed that?  You're blonde, good looking and female."  Detective Dorothy Shank's quiet words returned, crashing into Cheryl's mind with a force not proportional to the low volume with which they had been uttered...

"I could be a victim," she whispered, her eyes wide.  The thought made her shiver.

Still, a country girl at heart and raised to be tough, ready and equal to any challenge, Cheryl had been taught to work hard and to face the battles and fears of life.  She picked up the bat...  Then she reefed open the door.  Still nothing.  She stepped out, and immediately felt the added chill of a cool easterly breeze.

"Meet the profile," she whispered...  "That's right, Girl.  You meet the profile..."   She took a key from a nail just inside the door, placed it in a pocket and pulled the door closed behind her so that it locked.  Meet the profile, she might, but Cheryl had resolved a long time ago to pay her way through life, and never to run.

She began to patrol the grounds.

As though she was under the influence of a drug, ??? was aware of her hand pulling the heavy weight of her automatic from the holster at her hip, and yet she could not rush the move...  She gripped the cold butt... her eyes still scouring... for a target.  And then ???'s eyes widened even more as the unmistakable movement of two small eyes could be seen staring back.

Beneath the dancing, staring eyes... was the most frightening thing ??? had ever seen...

With the very last of her failing energy, ???'s left hand began to rise to grip the intruder's hand...  Her mind screamed within the silent cavern of her gently lolling head.

???'s raised left hand butted the protruding arrows, pushed against them twice more, and then dropped lazily back to her lap in defeat...  For the last time her mind screamed at her to act, but her body refused.  Only a series of frantic panting breaths gave any sign that she was aware of her torture, as her killer then leaned a large hunting knife before... ???'s throat, opened her wide, then pulled back on her chin to allow her blood to vent.

??? nodded, surprised at the hidden tension rising to the surface...  "Okay, she replied.  "I take your point..."  She smiled again.  "And besides... I don't believe you're the killer..."  She paused, eyeing him as a short silence ensued her comment.

"Are you?" she asked innocently.

He did not answer, but simply smirked and shook his head as if to say that the question did not warrant a reply.  But for the first time, ??? began to wonder if she was totally safe with the handsome, young... 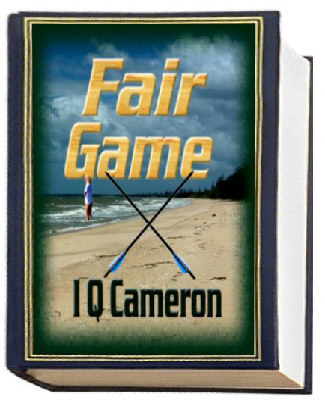