Unsuspecting victims wake up in a jungle setting, with no memory of how they arrived there.  Worse still, they suddenly find themselves being shot at by an unseen hunter, victims in a cruel and deadly game.

Money and power gone mad meet in a jungle setting, a deserted town, and even a spaceship - and all with deadly consequences for the beleageured prey, who must run for their lives at every turn.

Only when two of the victims find a way to play against their lurking enemy, does any of the hapless victims stand a chance.   For the two Christian heros, it will be a fight to the death against impossible odds.  And the question quickly becomes, "Who will survive?"

Imagine waking up in a tropical island paradise, or on a spaceship out among the stars, or in a deserted town – with no idea how you arrived there!  Three small groups of bewildered abductees wake up to find themselves in exactly those situations, only to quickly realize they are the sporting attraction in someone’s game – a brutal and sadistic game of hunting and slaughtering unarmed prey!

Graphic is a story about corporate and government corruption taken to a dangerously high new level.  It’s a story of greed and callous disregard for life, of multiple murders, and all done with the sanction of ruthless and corrupt powers.

Forced to run for their lives as their fellow victims are brutally murdered by unseen killers, it quickly becomes obvious that someone is killing them for sport!  Victims are trapped with no hope of escape.  Brutal death is only a matter of time for each of them.

No shortage of blood and violence here!  You’ll be on the edge of your seat as you ponder who might survive (if any), and why such horror is taking place.  Danger lurks everywhere.  Death comes viciously and without warning.   Are they being hunted by aliens?  Invisible monsters?

There seems to be no hope.

But the groups have various things in common.  Each victim is healthy, fit and bright.  None of them is there by chance.  And there are cruel, heartless masters behind each setting, and equally callous killers behind each sadistic, violent death.  Can you find the common threads?

Graphic offers the reader a chance to ponder just how far brutal regimes and corrupt forces might actually be prepared to venture in their quest to gain absolute supremacy.  Or… is it all just about wealth?

You be the judge.  Guess it if you can – before it’s too late…  In the end, you may find yourself never able to look at powerful business, or even your own government in the same way…

...the attacks looked small, but Harry knew that the sniper’s bullets would have heralded a much more violent, gruesome destruction within.  Two more fists had propelled considerable portions of the young woman’s lungs and shattered ribs through gaping holes in her back, plastering the tree behind her.

Harry tried to shake the thoughts from his mind.  Julie, the gushing, positive, smiling actress had been dead before her shocked face had kissed the earth.

And the rest of the group had been running ever since.

“This is just… an illusion,” insisted Genie.  “Look, there’s just no way that all of us could have been… magically transported to some… ship in outer space!  That’s just ludicrous.  Think about it.  No.  This is just someone’s idea of a joke.  A sick joke.”

Mickey Rollins... had been the first to die...  Genie had been behind him, and off to one side when he had been shot.  She could still hear the blast, like nothing she had ever heard before, and she could still recall with unpleasant clarity the massive hole that had exploded from Mickey’s back.

It had been horrific, with a wild spray of blood and flesh torn away to leave a hole the size of a very large fist torn right through the man’s lower chest from front to back.  And there was a crackling, sizzling sound too, unlike anything she knew, though she only remembered it now, long after the event was over.  Mickey Rollins had been knocked back as though hit by a truck.  And he had barely moved a muscle.

He held up a single hand high in the air, again as a sign of surrender to the shooter.  They were sitting targets, lying exposed on the road, but in shock and already aware that his new friend would very likely die, running was strangely not his first priority.  As much as a natural instinct told Mal to pick up the wounded woman and run, he knew the sniper could easily prevent such a move.

In those frightening, painful and surreal moments, Mal knew instinctively that he was in a game – a cruel, sadistic game...

“Shhh,” he whispered, and he reached out a hand to rest on ???’s brow.  Her mouth opened once more, and she looked again like she might speak.

He knew he must act quickly if he was to fulfil his imaginary path to becoming what he believed to be a true warrior.

He dropped ???’s wrist and placed his hand instead on her shoulder, then withdrew the long, curved blade of his sword.  t took some time before the full length of the bloody blade was free, and when it was, [she] remained still and submissive, kneeling with her arms drooping lazily at her sides.  Kazuki looked at how her head was bowed, her eyes still staring into her lap...

He knew he must act now, to truly fulfil his dream.  She must still be alive!  A long, low wheezing sound from ???’s throat gave him the trace of hope he needed.

He raised the bloody sword and allowed its sharp, curved edge to gently kiss the nape of her neck as her head tilted fully forward...

Kazuki Gi’s mind had moved beyond the realm of reality.

Months of murderous games and appalling imaginations had twisted him so far that he could no longer distinguish real from imaginary – or perhaps did not want to.  To his brutal, seared conscience, he was no longer a mere mortal; no longer the man he once was.  Indeed, he had become the ultimate warrior – indestructible – his will to be victorious unable to be extinguished.

With his rifle slung over his shoulder and the long, shining sword of his imaginary ancestors firmly gripped in both hands, he began to circle around his enemies, moving stealthily, searching for a fitting adversary to kill – to sacrifice on the altar of Gi’s insane ego...

It didn’t take him long to find his next worthy victim.

She was just ten metres away, dressed in something akin to black Lycra that clung to her rather attractive form.  She had long brown hair that sprayed across her back and danced about as she moved.

Not the jet-black hair of his own race, but she would do, nonetheless.

“I get it,” agreed Harry.  He sighed, then looked about.  “We all get it.  But what you don’t understand is – I’m a Christian.  Hey, just a few hours ago I was prayin’ to God to give us a way to survive this nightmare.  And we did!  Some of you may not believe that God even exists, but I’m here to tell you that he does – and he answered me when I asked him to..."

Purchase the amazing conclusion to Graphic. 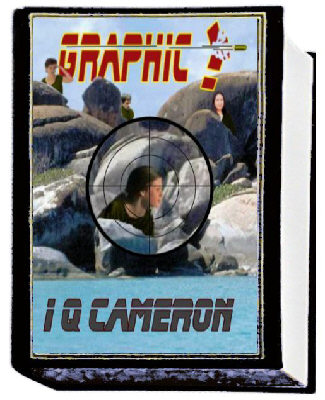